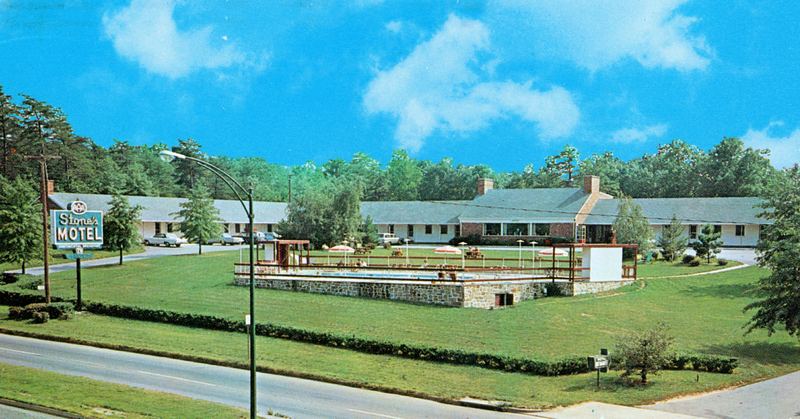 In 1953, F.D. Patton obtained a building permit to erect a new motel on King Street just west of Shirley Highway, then known as Route 350. The following year, the newly opened Patton’s Town House Motel promoted its “modern” and “spacious” accommodations in a newspaper ad. Patton’s announced that its location, just “8 1/2 minutes from downtown Washington,” and its “big” and “smartly decorated” rooms made it the “perfect place to send your out-of-town friends.”

Like the Key and Lincolnia motels to the south along the Shirley Highway corridor, Patton’s was conveniently located to accommodate Washington, D.C., tourists, as well as travelers with business at the Pentagon.

In the late 1950s, new owner Paul T. Stone changed the name to Stone’s Motel. Stone’s had a pool, seen in this postcard image, and guest rooms with televisions, wall-to-wall carpeting, radiant heat and air conditioning.

In the mid-1970s, construction began on the nearby Park Center development, and the motel was demolished around 1976. Today the intersection of Park Center Drive and King Street is located to the left of the motel sign in this image.