Part 1: Vibrant village center relating to every aspect of the community 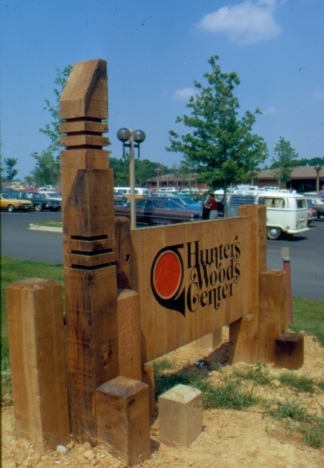 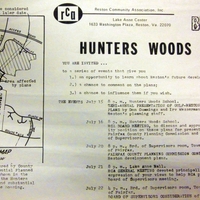 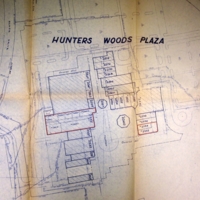 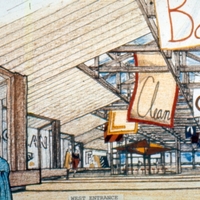 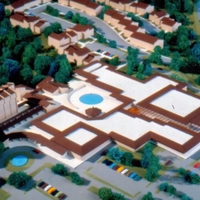 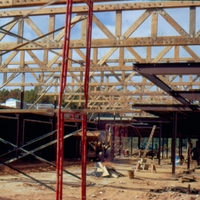 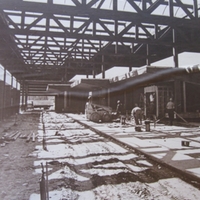 In 1965, the Fairfax County Board of Supervisors approved a development plan for a new community in southern Reston that would become Reston’s second village center. The concept of what became Hunters Woods called for a combination residential development, retail, professional services, and community center that could be accessed on paths by foot or bike, as well as by car. This vision was part of Reston’s larger plan for five village centers, each serving and providing basic retail and community services to residents in the immediate area.

After hundreds of single family homes had been built in the vicinity of Hunters Woods, Gulf Reston proceeded with plans for low and moderate housing and the Hunters Woods Village Center in 1970. Architect Jack Cohen of Cohen Haft and Associates of Silver Spring designed the shopping center with a covered central walkway with retail space along both sides that widened as it reached an open space with a circular water feature that would serve as a fountain and an ice rink. The parking lot was outside the center, mostly to the west, and two large spaces for a supermarket and a drugstore could be easily accessed from the lot. An attached two-story professional building on the south could accommodate medical offices. With plans to build a high rise for seniors, church and community center just east of the common open space within a few years, Hunters Woods would offer residents convenient access to retail and essential services.

Gulf Reston’s marketing materials for potential tenants cited the importance of paths and underpasses from nearby homes that would generate pedestrian traffic to the village center, which was designed to serve 15,000 to 18,000 residents, but could also attract shoppers from outside the immediate community. Cohen added that, “It is our belief, as Architects, that we will be able to create an alluring environment to encourage the repeated and frequent visits of shoppers to Reston’s Hunters Woods Village Center.”

Faced with brick and wood, the shopping center itself was designed to have one central identity with one low-rise roof, but stores would have their own brand identity through signage and storefront design. In addition to traditional retail and restaurants, the center included public services like a library and small post office. In a project brochure, Cohen Haft stated that the overall design was "oriented towards people not automobiles."

Construction began in 1971 and in September 1972, the first stores, including Drug Fair, a florist and a gift shop, opened for business. On December 2, Hunters Woods Village Center celebrated its grand opening with an Elizabethan-era fair theme featuring performances by the Folger Theatre Group and remarks from local leaders. The Reston Community Association issued a statement that praised the new center’s “high quality of design and aesthetics” and the combination of uses that would make it a “vibrant village center relating to every aspect of the community.”