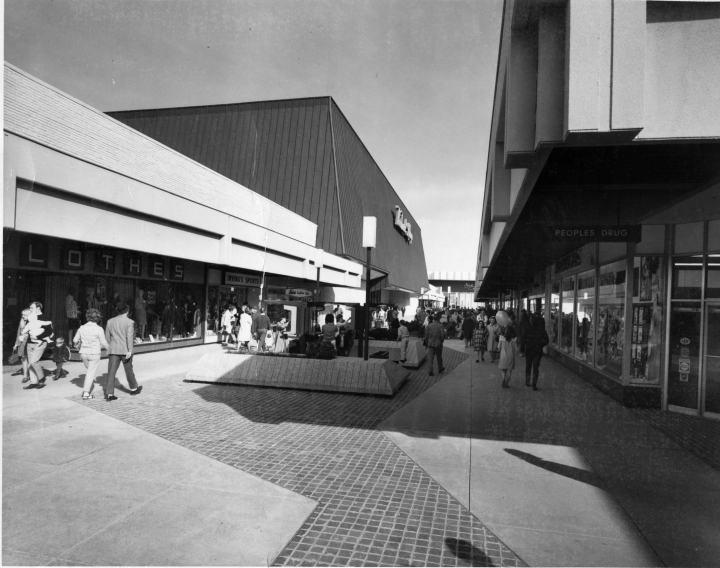 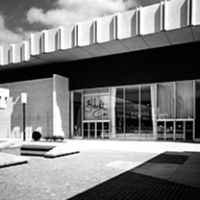 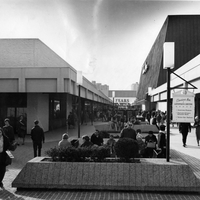 Shoppers at Landmark Center with Sears visible in the background and Woodward & Lothrop on the right, January 1973.
Courtesy D.C. Public Library, Washingtoniana Division 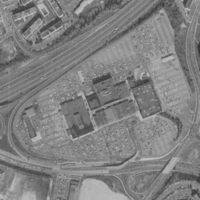 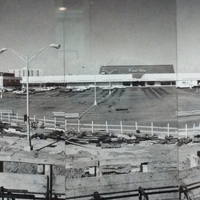 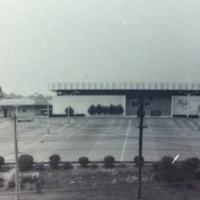 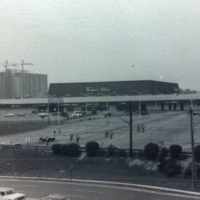 Developed to attract shoppers from across Northern Virginia, Landmark initially competed with Seven Corners in Baileys Crossroads and Parkington in North Arlington, which like Landmark were located along major local transportation arteries and afforded customers ample parking that traditional downtown retail districts could not.

Described by the Washington Post in 1969 as a “concrete oasis of parking spaces, gleaming shops and air-conditioned modernity,” Landmark offered shoppers easy access through anchor stores or through cuts between the buildings. Once inside the open mall area, shoppers could access stores on either side of the plaza. This concept was designed to give customers, mostly busy women, the convenience of going to the center to visit one store in particular for a quick purchase or making multiple purchases at several stores but with just one car trip.

Major design elements of two of Landmark’s anchor stores, both Washington, D.C.-based chains, were later replicated around the metropolitan area as new malls were built. Woodies’ oversized copper mansard roof was used in the design of the Woodies at Iverson Mall and as a focal point at the entrance to its Tysons Corner store, which both opened in the late 1960s. Hecht’s eight-foot fascia with vertical decorative details was replicated at its Tysons store, although at Landmark it was separated from the off-white brick façade by a recessed panel of black tile, rather than by tannish brick used at Tysons.

Landmark’s smaller specialty stores represented popular national chains, like Casual Corner women’s clothing and Thom McAn shoes, local chains like People’s Drug and Raleigh’s menswear, and individual businesses like a barber shop. A review of Landmark merchants from the late 1960s to end of the 1970s shows little change or turnover of the businesses during that time.

One exception to that may be the arrival of Market Place Ministries, also known as Metro Shopping Center Ministries, in 1968. Market Place Ministries adapted space on the northeast side of Landmark, as well as underground space, to build offices, classrooms and a theater that would bring social and community services to the shopping public. The ministry ceased operations a few years later and the space was adapted into more retail space which was marketed as Landmark Center Underground.